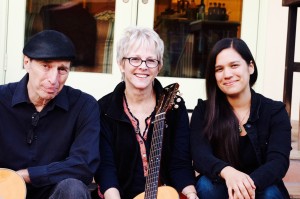 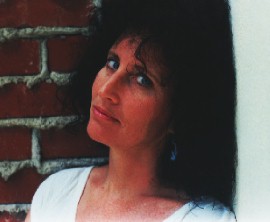 A folksinger from Phoenix with Long Island New York roots, Beth sang and played guitar in Honk, a California rock ‘n roll band who landed several major record deals in the early 70’s and toured with Chicago, Loggins and Messina and The Beach Boys.   Musical influences are all over the map, from Bessie Smith and Sister Rosetta Tharpe to Gillian Welch to Steely Dan.

In the 80’s, after decades of playing in bands with brilliant songwriters, she finally shook it off and began writing herself and all her influences melded with her own voice into an indescribable yet familiar expression.  Her songs are very personal and intimate, and though the folk idiom is strong, her harmonic structures might give a purist the shakes.
She has made 5 CD’s on her own, has appeared as band member on 5 others, and has sung on countless other projects of every description, in most languages.  “Shared stages” with a phonebook of the most influential musicians including Jackson Browne, Kenny Loggins, Michael McDonald, Christopher Cross, Bonnie Raitt, and the list goes on.
She won first place songwriter at the Tucson Folk Music Festival in 2009, and in her home town, Laguna Beach, has hosted (for 9  years!) one of the best Songwriter’s Showcases anywhere.  Among many other concerts and festivals, she played a Living Traditions concert in Anaheim in 2009, and also in 2012 and 2013.  Also played the prestigious “Lord of the Strings” concert series.  She also taught at Penny Nichols Summersongs Camp in 2010 and appeared on the main stages at the Tucson Folk Festival in 2010. 2011 and 2012.     www.bethfitchetwood.com
“…pure, plain beautiful singing.”   – Mike Boehm,  L.A. Times 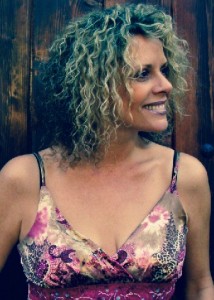 Kelly Fitzgerald is known for her soulful style, which is a blend of folk, blues and rock. Influenced by Billie Holiday, Ricky Lee Jones and Led Zeppelin, Kelly’s voice has been likened to Bonnie Raitt, with a contemporary comparison to Melissa Etheridge and Sheryl Crow. The result is music that is smooth and gritty, honest and moving.

Kelly was born and raised in Salem, Massachusetts where she performed in nightclubs with local bands while attending high school. Shortly after high school, she left Salem and began touring throughout the U.S., including Hawaii and the Caribbean, with long-time friend and songwriting partner, guitarist Brian Pothier. After years of touring, Kelly and Brian landed in Southern California in 1989, where they met drummer and collaborator Adam Roach.

Playing over 200 nights a year, Singer/Songwriter Kelly Fitzgerald has toured all over the world as a solo and ensemble performer. She and her band have shared stages with artists such as John Hiatt, Shelby Lynn, Nancy Griffith, Cheap Trick, Eddie Money, The Gin Blossoms, Vonda Shepard, The BoDeans and others.

Her much- anticipated album, “Be,” is her fifth release, following “That and Change,” “So Far,” “Halfway to Naked” and “Vesica Pisces.” Kelly also released a full length Christmas CD in November 2013 comprised of six original songs and six classic covers.

Based in L.A, Kelly travels to Nashville regularly to write and perform. She was chosen as one of the top 25 finalists in Nashville’s “Music City Songwriting Competition” for her song “I’m Done,” which appears on “That and Change.” Fitzgerald and writing partner Brian Pothier co-wrote and recorded the song “Thank You” with Christina Fulton, which premiered on MTV’s The Jersey Shore in Sept 2011.

While signed to an independent record label, Kelly and her band had the pleasure of recording the “Halfway to Naked” album with Grammy Award Winning producer Jack Douglas (John Lennon, Aerosmith, Cheap Trick). “It was a great experience working with Jack,” says Kelly. Jack responded by saying, “The songs are well crafted and the girl sings phenomenally.”

In April 2003, the single No Easy Way Out (written by Wayne Kramer) from the “Halfway To Naked” album won accolades for the band by earning the #2 spot for the most added spins just behind Lucinda William’s “Righteously” on the triple A charts.

The “Halfway to Naked” album earned Kelly and her band a nomination for Best Adult Contemporary artist by the LA Music Awards in 2003, which they won in 2000 for the same category. Kelly was also nominated for Best Female Vocalist. In 2005, she was nominated for Best Female Vocalist and Best Solo Performer at the Orange County Music Awards and in 2006 Kelly made the “Music Connection’s Hot 100 Unsigned Artists” list.

In May of 2007 Kelly received the “Comet Award” for emerging artist by L.A Women In Music. She won the 1st place prize in the 4th Annual GINA/LAWIM Singer Songwriter Contest for her song “Summer Rain,” which you can hear on “That and Change.”

Together with her band, Kelly has created a grass roots following across the U.S. and the world as they have traveled to Europe and Mexico and performed for the U.S. and NATO troops in Bosnia and throughout the Balkan Islands.   So far, Kelly is enjoying a lifelong career doing what she loves most: writing, performing and sharing her music with audiences around the world.

“Vocalist Kelly Fitzgerald sings with authority, painting pictures with her words; the players are tight and the arrangements nicely varied. Strong lyrics and a singer who knows how to deliver them…” —Music Connection Magazine

“There is something about Kelly Fitzgerald’s voice that is extraordinary. It’s warm and smooth as butter, with just enough rasp to make it sexy and real. ” —OC Metro

“Armed with an emotive and wonderful voice, Kelly Fitzgerald continues to make leaps as a songwriter as evidenced by her third and latest CD, So Far.” — Robert Kinsler, Dana Point News

“Her third and finest CD, titled So Far, is the culmination of all she is today. It’s a timeless, soulful recording steeped in the tradition of rock, country and acoustic blues, warm, loving embrace with a compelling personal voice dipped in a vat of life experience and humor.” —Music Connection Magazine

“Her powerful voice is confident on the new record, and the frequently bluesy accompaniment gives it a gospel feel” —Performing Songwriter

“Finally a clear poignant woman who doesn’t whine. Kelly Fitzgerald is not only tops on our play list but in my personal collection as well.” —Liz Mann, WLPW 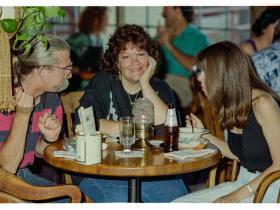 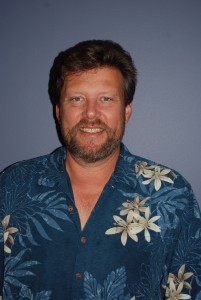 Playing the guitar opened his ears to genres that he would never have pursued otherwise, country, folk, bluegrass, and ultimately his own sound. Songwriting offers the opportunity to experience the world through a semi-poetic narrative perspective. Music for Eric Auckerrman is profound because of it’s transcendent possibilities, oh, and it’s also great fun! 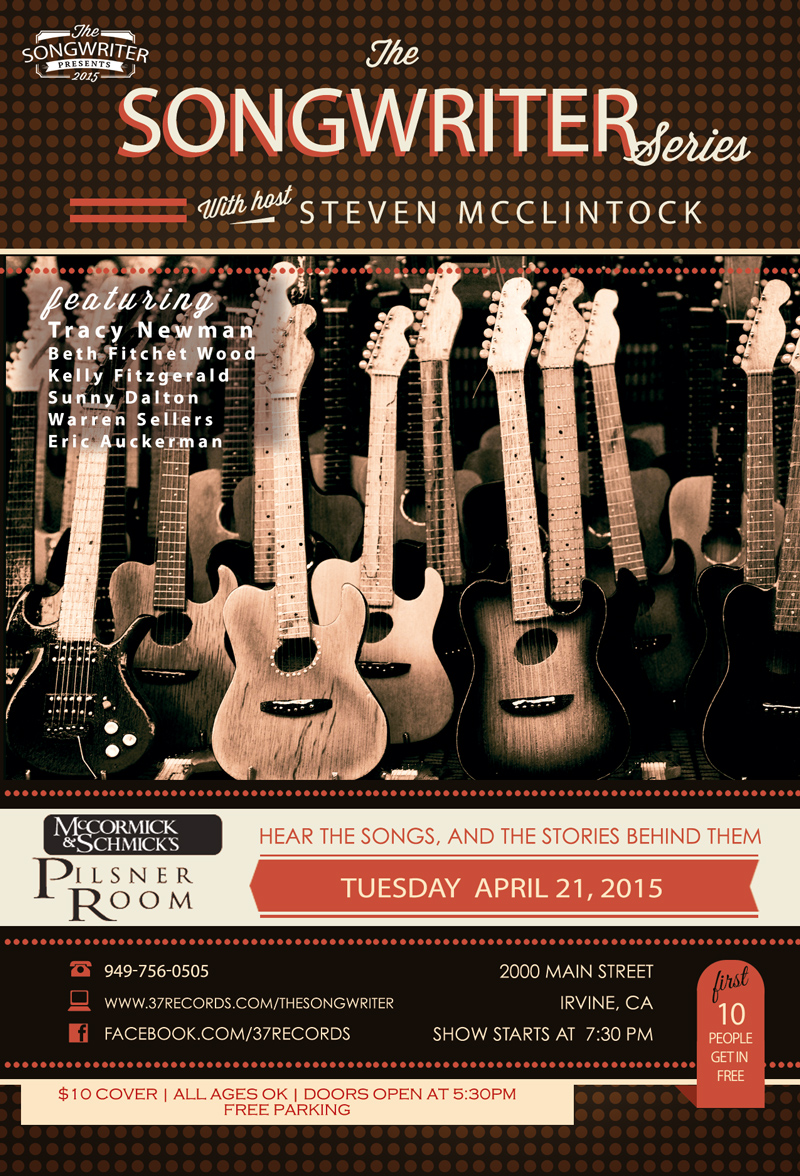